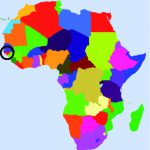 Number of people with albinism we support: 144

Since 2016 Ida van Rooijen has become country coordinator for G.Bissau.
In April 2016, the AAGUIB (Albino Association in Guinea-Bissau) received the sunscreen through Mavegro (boat transport), but this was stopped at the end of 2016 because there were no more transports from the Netherlands to G.Bissau. Chairman AAGUIB Alberto Sega says to reach <100 albinos.
At the end of December 2017, 100 liters of sunscreen were sent by plane to G.Bissau. Alberto Sega had prepared the recept well. With the help of the Ministry of Health, the cargo was delivered by Customs within 2 days. Immediately afterwards, Alberto delivered the sunscreen to the people with albinism who are registered by him. Ida paid the transport costs to the interior for him. Alberto sends the report about this to Ida.

In G.Bissau, Alberto receives support from Francisco A. Moreira who has an NGO and has a computer. Ida communicates with Alberto via Francisco. Mavegro continues to provide support, among other things by making space available for storage of the stock of sunscreens.
The plan is to send sunscreen and sun hat and sunglasses to G.Bissau once a year. If possible by boat because this is less expensive than by plane

With your donation of 5 euros you can support an albino for two months. Help the albinos in Africa and donate by

You want to help us to send as many bottles of sunscreen to albinos in Africa? Please contact us via vrijwilligers@afrikaansealbinos.nl